Cider is one of those beverages that offer a refreshingly fruity and astringent alternative to other drinks on the market. Many drinkers note it as tasting more or less like a typical fruit drink with no real notable alcoholic aftertaste. While it may not possess the same popularity as beers and wines, cider is still a much-loved beverage with a rich history. 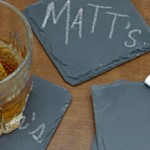 Make your own Chalkboard Beverage Coasters