This St. Patrick’s Day, ditch the disappointing green brews and right all your Guinness-related wrongs. We’ve got the truth about the Emerald Isle’s oft-misunderstood quintessential brew. Sláinte!

Before it became the signature beverage of drunken parades and fraternity parties everywhere, this popular Irish beer was a community-minded company championing human rights causes and saving Irish architectural landmarks. And forget what you’ve heard about the ultra-calorific, “meal in a glass” myth; a pint of Guinness is surprisingly health-conscious.

1. What’s in a name?
A stout by any other moniker might indeed taste as sweet. Guinness’ dark, creamy brew was originally called Porter, and later Stout Porter, to denote its strength and popularity amongst U.K. train porters. In the late 18th century, the then-singularly named Stout grew so successful that Guinness stopped brewing other varieties of beers, focusing instead on porters and stouts.

2. Out of Africa
Nearly 40% of Guinness is consumed somewhere in Africa. Of five Guinness-owned breweries worldwide, three are in African nations. Nigeria, home to one of those five breweries, is the world’s second-largest market for Guinness consumption. Great Britain is first, Ireland comes third, Cameroon fourth, and we in the U.S. stand in measly fifth place.

3. Trivial pursuit
Hold up. Was Freddie Mercury born in India or Zanzibar? Guinness is so dedicated to settling the sort of obscure debates born in bars that in 1954, managing director Hugh Beaver launched a compendium of little-known facts called the Guinness Book of Records. Originally intended as a marketing giveaway, the book became a runaway success upon its commercial release in 1955, and one of the oddest publishing sensations since an auto company named Michelin tackled fine dining.

4. Color block
It’s not black. It’s not even brown. Hold your beer up to the light – or, hey, maybe try drinking someplace that isn’t so dimly lit. You’ll see that Guinness is actually a deep, dark red, a color the company attributes in part to the roasting of malted barley during the beer’s preparation.

5. Progressive pints
Arthur Guinness, a wealthy Protestant with minimal beverage experience, founded his now-world-famous St. James’ Gate brewery in 1759. He happened to be an innovative human rights advocate, funding Ireland’s version of the Red Cross and creating housing developments for Dublin’s disenfranchised poor. As a company, Guinness supported Irish troops in both World Wars, guaranteeing its workers jobs upon return from service and paying their families a portion of their salary in absentia. 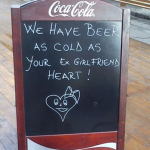 The most hilarious bar signs