Originally created for medicinal purposes, vermouth has a long history and broad footprint. Everyone from the Romans to the ancient Greeks has crafted their own version.

The fortified wine flavored with botanicals, roots, and herbs gets its name from a 16th-century Bavarian wine, vermutwein, which was flavored with wormwood. Wormwood is the defining ingredient in vermouth and the herb provides the drink with its distinct bitterness.

An ingredient in a number of classic cocktails, vermouth has enjoyed a quiet revival the past two decades. Now, with a growing trend toward lower-ABV imbibing, the fortified wine is beginning to thrive on its own as a refreshing aperitif.

Want to brush up on some of the finer details on the fortified wine? Here are seven tricky questions about vermouth, answered. 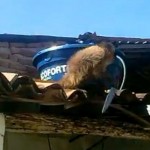 Drunk monkey armed with a knife goes on rampage inside bar