As we gear up for Adam Liaw’s most incredible and inspiring Destination Flavour adventure yet, we uncover a few highlights and whoa delights from one of the most influential cuisines known to humankind – Chinese.

There’s no such thing as Chinese food

If you think you know a fair bit about Chinese food because your local takeaway menu is on high rotation at home, then guess again. The variety of Chinese foods on offer will absolutely blow you away as “every region has a cuisine with its own, very different taste,” says Adam Liaw. There are hundreds of regional cuisines in China and falls under eight key classifications, with each style belonging to a major Chinese Province – Anhui, Cantonese, Fujian, Hunan, Jiangsu, Shandong, Sichuan and Zheijang. Each of the eight greats holds their own food powers thanks to their environment, history and political landscape, and each style has its own approach to food, etiquette and art.

Before prosciutto and jamón, there was Jinhua

Jinhua ham is China’s best-kept secret and perhaps the most famous ham in all of China. The history of curing meat goes back thousands of years and in Jinhua, they’ve been doing it for a millennium. Many people believe that Marco Polo took the secrets of Jinhua ham-making back to Europe in the 13th century and gave them things like pancetta, prosciutto and jamón ibérico. It’s the salting process that’s the trickiest to get right, with only skilled ham masters knowing the correct salt-to-weight ratio and the perfect temperature for curing. 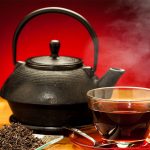 Did You Know There Is Ink In Your Tea?