When the apple market collapsed about 15 years ago in the region around Lake Chelan in central Washington State, a handful of farmers decided to make the transition from apples to grapes. Though the apple market has recovered, there’s been no turning back for these erstwhile orchardists. Along the shores of Lake Chelan, wineries have been popping up as quickly as bubbles in a newly uncorked bottle of Champagne.

Designated an official American Viticultural Area in 2009 and one of Washington’s fastest-growing wine regions, Lake Chelan now has almost two dozen wineries clustered around its southern end. The narrow lake, about 50 miles long, has long attracted tourists, in particular Seattle residents only four hours away by car, but now its award-winning wineries have put it on the map for other travelers. The cool nights, arid climate and unique mixture of volcanic and glacially formed soil all make the lake conducive to winemaking, the region’s vintners said.

The glacial water often used to irrigate helps create “this wonderful minerality that makes Chelan wines unique — a brisk, almost wet-stone feeling in your mouth,” said Judy Phelps, an owner, with her husband, Don, and winemaker at Hard Row to Hoe Vineyards (hardrow.com). Hard Row to Hoe, known for a cabernet franc with whiffs of spice and chocolate, opened in 2006, though it did so under the less-than-memorable name of Balsamroot Winery and Vineyard, Ms. Phelps said. Hiring a historian to dig up local stories, they rechristened the winery in 2008 with a saucy nod to miners of the late 1930s who used to row across the lake at night to a waterfront brothel. Sample the Shameless Hussy viognier, which has fruits that pop; a sharp eye will see silhouettes of nude women that pop out of the antique-style wallpaper. 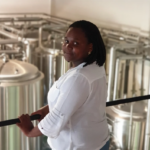