The design was unveiled earlier this week at Singapore’s Changi Airport Departure and Arrival halls, and is set to roll out at other airports internationally from April until July.

The denim is lined internally with a high-tech shield with supreme cold preserving capacity that keeps the bottle cool for up to two hours.

The packaging also features a QR code, which can be used by users to scan the product using smartphone and explore new cocktail recipes – Absolut Drinkspiration.

The launch is being supported by a multi-media marketing campaign, including brand installation in major international airports and conducting tasting events. 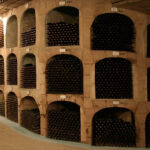