The African elephant is on the brink of disappearing- the latest wildlife census information puts the number of African elephants living in the wild at around 400,000. For many this fact seems far removed from their daily lives, but for those living in Africa, the reality is unimaginable.

With one elephant killed every 15 minutes for its ivory, Amarula Trust and WildlifeDirect in Kenya joined forces to raise awareness on the plight of the African elephant.  A global campaign was kicked off in October last year and is now reaching momentum in the build up to World Elephant Day.

On 12 August,World Elephant Day, the world’s attention was on the conservation of elephants given the devastating impact that ivory poaching has on elephants. Amarula Trust and WildlifeDirect added their voice to the conversation around the very real possibility that the African Elephant could disappear by 2030.

To illustrate this harsh reality, Amarula has decided to remove the elephant from its label to illustrate to consumers, the impact of ivory poaching. This is part of the #DontLetThemDisappear campaign, an initiative which seeks to raise global awareness on ivory-poaching and the work currently being done by Amarula Trust and WildlifeDirect in the continued fight against ivory poaching.

“Amarula shares a close relationship with the African elephant – it’s not just our icon, we have always had a special bond with these magnificent creatures as the marula tree and its fruit contribute enormously to the well-being of the elephant and the very existence of Amarula”, says Saramien Dekker, Amarula Global Brand Development Manager.

“Removing the elephant from our logo –signifies our commitment to the fight against ivory poaching and saving the African elephant from extinction. If we don’t raise awareness to stop the ivory trade, elephants will disappear – just like the one our label” says Dekker.

Spearheading the campaign is Dr Paula Kahumbu, CEO of WildlifeDirect and renowned global expert in the field of elephant conservation: “On World Elephant Day we want to capture the world’s attention. There is a real message of hope – by making educated decisions around ivory products, the average person will make a real contribution towards saving the African elephant from extinction”.

Amarula will release a webisode on YouTube, to show the reality of poaching and the “behind the scenes” story of how ivory gets to consumers.

Join the conversation with #DontLetThemDisappear. 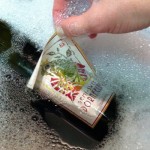