A brewery in Indianapolis has launched a non-alcoholic beer made specially for dogs.

The dog beer is made using meat bones and trimmings donated from the brewery’s neighbor Smoking Goose. Brewers create a stock with bones, carrots, potatoes, and brewer’s yeast. The stock simmers for three hours before it is blended with wort, the liquid extracted from the mashing process when brewing actual beer. It all comes together in a keg. 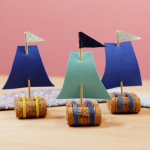 How To Make Adorable Little Sailboats Out Of Wine Bottle Corks