In a new advertisement campaign, Belvedere Vodka has released a highly controversial advertisement (picture above) suggesting that drinking Belvedere is easier than raping a woman.

The tagline on the advertisement reads: “Unlike Some People Belvedere Always Goes Down Smoothly.” The image is of a clearly frightened woman with a smiling man who is grabbing her from behind.

The advertisement is not subtle (not that it matters) in suggesting that raping a woman is acceptable, even if she doesn’t “go down smoothly.”

To use rape as a means to sell alcohol, or anything, is reprehensible. How this advertisement even got vetted through the appropriate channels with a stamp of approval is beyond me. Who in their right mind thought this would be a good idea?

After outrage on twitter and Facebook following the release of the advertisement, Belvedere issued various apologies including a personal call from Charles Gibb, the company’s President, to RAINN, the Rape, Abuse, and Incest National Network.

“I would like to personally apologize for the offensive post that recently appeared on our Facebook page,” said Gibb’s on the company’s website. “It should never have happened, and the Company will take whatever steps are necessary to make sure that it never happens again. We deeply regret this lapse.” 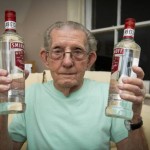 Great-grandfather, 92, stopped from buying vodka because he didn`t have ID