I received a personal invitation from Chef Bertus Basson to join him for lunch at his new Bertus Basson at Spice Route restaurant, which opened on the Paarl wine farm 6 weeks ago.

He and his charming wife Mareli managed to re-invent the restaurant within five days from taking over the space, modernising it to reflect their promise of ‘A Modern South African Restaurant’, both in terms of its decor and its food offering.

A lot has changed at Spice Route, my last visit having been when Charles Back had taken over the wine estate, previously called Seidelberg, next door to his Fairview. I didn’t have time to see all the artisan businesses which have opened at Spice Route since Back took over, but they include a Richard Bosman charcuterie outlet, with tastings at R30 (a bit cheeky I thought), a wine tasting centre, and Cape Brewing Co, about which I recently saw a programme on German TV, highlighting how brewmaster Wolfgang Ködel has helped develop the craft beer revolution in our country. DV Artisan Chocolate, Barn Artist’s Studio, Red Hot Glass, Barley & Biltong, Wilderer Distillery, and La Grapperia are other businesses which also operate on the estate. Brenda’s Deli is near the entrance. 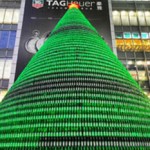 Seal the festivities with a Xmas Tree