They may have been, by her own admission, a little rambunctious.

But Lisa Johnson is not so sure that she and ten of her female friends would have been asked to get off the Napa Valley Wine Train if they had been white.

At the weekend, Ms Johnson endured what they said was a humiliating experience after forced to get off the train for allegedly laughing and talking too loudly.

Sfgate.com reported that the women posted online images and accounts of what happened to them, sparking the hashtag #LaughingWhileBlack.

“It was humiliating. I’m really offended to be quite honest,” said 47-year-old Ms Johnson.

“I felt like it was a racist attack on us. I feel like we were being singled out.”

In a statement Sunday, Napa Valley Wine Train spokeswoman Kira Devitt said the company “received complaints from several parties in the same car and after three attempts from staff, requesting that the group keep the noise to an acceptable level, they were removed from the train and offered transportation back to the station in Napa.” 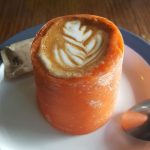 Coffee hipsters have finally gone too far with the Carrot-cino