A funny thing happens when you inhale alcohol: You get drunk.

Depending how much alcohol is in the vapor and how much vapor is in the air, the rate at which a pleasant buzz creeps over you can be much faster or much slower than throwing back three shots of tequila.

But let’s say you find yourself in a room that happens to be filled with a sweet mist that smells like a delicious gin and tonic that’s mixed at a ratio of 1 part alcohol to 3 parts tonic. How long until you’re feeling it?

“An hour is approximately the equivalent of one drink,” says Sam Bompas. “A strong one.”

Bompas knows his boozy mist. He’s one half of Bompas & Parr, a team of culinary wizards best known for crafting wild sensory experiences like chocolate rock-climbing walls and jumbo Jell-O molds. Their work is hedonism defined—it has no purpose beyond introducing you to a new sensation. For the past six years, Bompas and Harry Parr have been working with scientists to perfect getting drunk on vapor. They recently opened a pop-up in London where you can—you guessed it—inhale your intoxicant. The name of this bar, Alcoholic Architecture, is a nod to the fact that you’re breathing in alcohol on a room-sized scale. 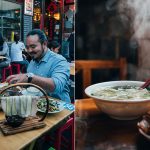