SONOMA, Calif.—Someday, when California’s persistent drought is finally over, wine lovers may lift a glass to its memory, toasting the extraordinary 2014 vintage it made possible.

While the three-year dry spell has inflicted widespread economic damage on the Golden State, especially to its giant agriculture industry, an exception is the heart of its famed Wine Country—Napa and Sonoma counties north of San Francisco. Here the warm days, cool nights and dry weather have produced grapes of taste and quality that many vintners say they haven’t seen since the last drought in 2007-2009, and perhaps even better.

“This year’s vintage could be one for the ages,” said Michael Coats, co-owner of Valerie’s Vineyard in Sonoma County, which specializes in Pinot Noir.

That sentiment is echoed all over the two counties, which produce most of America’s high-end wines. Part of the reason: Reduced water forces the grapevines to produce smaller berries, which results in sugar and flavors being more concentrated, said Michael Honig, president and co-owner of Honig Vineyard & Winery in Napa County. If there is too much rain, he said, the grapes can be covered in mildew and mold.

“If there’s a silver lining to the drought in terms of wine grapes, it’s that they are really drought tolerant,” said Mr. Honig. He says his winery, like others, is enjoying another bonus of dry weather: With grapes ripening faster under the endless sun, vineyards are being harvested weeks earlier than normal—avoiding problems like autumn storms. 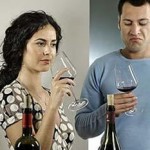