CHAMPAGNE LOVERS are legion. Prosecco enthusiasts are even more numerous (albeit perhaps not quite as discerning). But who are the fans of California sparkling wine?

I don’t know anyone who drinks or buys or even talks very much about it. And yet California wineries sold nearly 9 million cases of sparkling wine in the U.S. this past year—more than all the sparkling wine imported to this country combined, according to the Wine Institute. Clearly, people are drinking it somewhere.

A friend who is an occasional drinker of the wines thinks that one problem is they “all look the same”—referring to both the labels and names. He also notes that none have particularly memorable marketing campaigns.

This last fact seems particularly surprising given that many of the big sparkling wineries in California were founded by French Champagne houses. And no one does marketing better than the Champenoise. From sponsorships of fashion shows to polo matches, some of the houses seem to lavish as much care on marketing as they do on making wine. 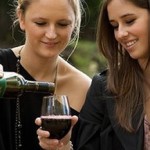