Here’s a weird one to bust out at your next dinner party: A new machine says it can make your wine taste better by blasting it with sonic energy.

Wine connoisseurs may wonder exactly how this is superior to a normal decanting process, which involves pouring wine into a separate bottle to remove sediment. According to a video on the Kickstarter page, the Sonic Decanter removes oxygen from the wine — the opposite of what normal decanting does — which supposedly helps preserve flavor for longer.

First of all: The process takes a bit of time. You have to wait 20 minutes for the Sonic Decanter to operate on a bottle of red, and 15 minutes for a bottle of white. During that time, the prototype made a bit of noise, but Mike Coyne — CEO of Dionysus Technology Concepts, the company that will make the Sonic Decanter — told HuffPost via email that the final product will be sound-engineered and quieter.

By and large, our testers seemed to enjoy the red wine after it had been through the Sonic Decanter process. We didn’t tell them which cups had been through the Sonic Decanter and which hadn’t, but we did take note of their comments. Our tasters didn’t mention any dramatic differences, but a couple of people said the non-decanted wine seemed “more acidic,” and someone else noted that it seemed to be “missing something.” One editor added that the non-decanted wine had a “harsher aftertaste.”

The white wine fared considerably less well in our taste test. Before starting the Sonic Decanter, you pour in two cups of cold water for the bottle to rest in. But remember, the process takes a full 15 minutes — enough time for a drink to warm up a bit, even under normal conditions — and we also noticed that the machine itself seemed to warm both the water and the wine bottle during the decanting process. That’s not great for a glass of white.

All of our white wine tasters noticed the warmth immediately and said it made drinking the wine less pleasant. Those who weren’t too distracted by the temperature noted that the decanted white was “smoother” with “less bite,” but everyone still preferred the cooler glass.

In general, he said, people do say they notice the effects more in red wine.

“Red wine has more components than white wines that are affected by the Sonic Decanter process. Therefore many testers report that the improvement is more noticeable in red wines,” Coyne told HuffPost. 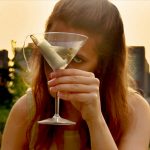