Yesterday was indeed a sad day in the winelands when the news broke that David Higg resigned from his position as head chef at Rust en Vrede. Below is the official press release from their PR Company, Media Vision.

David Higgs has resigned as head-chef of Rust en Vrede Restaurant to take up a business offer in Johannesburg.

“David will always be known as the chef who established one of the winelands’ finest restaurants as well giving the Rust en Vrede brand an added dimension of excellence,” says Engelbrecht. “I would like to thank him for his invaluable contribution and wish him well on his new career path where I am sure he will achieve the same degree of success he did at Rust en Vrede.

“Together with David, I have decided to appoint John as the new head-chef as his experience will ensure that our innovative and original cuisine, commitment to service excellence and sourcing of the finest produce will continue to remain at the heart of the Rust en Vrede offering.”

Higgs said his tenure at Rust en Vrede offered him the opportunity to realise his full potential as a restaurant chef. “As part of a fantastic team, I am proud to say that Rust en Vrede helped push winelands dining to a new level, and I have no doubt that Jean, John and the rest of the team will continue doing so,” he says. “Moving to Johannesburg from this environment is not an easy decision. However, the opportunity of being involved on a greater strategic business level within the food industry is one I feel compelled to pursue.”

Johannesburgers are in for some real treats in the near future.  David will be dearly missed and we wish him all the best for the future. Good thing mountains can’t be bought and shipped to another province. Johannesburg might have gained a extraordinary talented new chef, but Cape Town still has the Table. 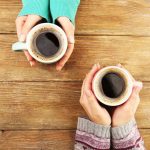 10 Dangers and Benefits Hiding in Your Cup of Coffee