One would think restaurants will not encourage sexist behaviour and rape culture in this day and age but a Cape Town restaurant decided to flip the bird to women’s rights.

In an article on Daily Maverick, award-winning drinks writer Leah van Devender tells the story of a new bar that opened on Sunday 30 August, the day after thousands of women took to the streets nationwide to protest against the dizzying rates of GBV and femicide in South Africa. The name? Floozies Flip & Dip.

The venue’s maiden post on its Instagram page was a doozy. It defined Floozies as “women who have many casual encounters or relationships”. Not bad so far; it could have been about sexual liberation and female empowerment, it being Women’s Month and all.

But it seems that was not the case nor intention. Here’s that post:

The post went on to outline the ill-conceived concept behind Floozies Flip & Dip: that you pick a burger off the menu and flip and dip it in the same way you’d choose whatever floozie takes your fancy, flip her over and (the rest is left to your imagination)… because, if you didn’t know, that’s what “flip and dip” means in a sexual context. There were even options for double- and triple-dipping.

After a massive public outcry, the restaurant changed its name and issued an apology.

In a statement on Facebook, the owner of the restaurant Douw Krugmann said the name Floozies “was in bad taste”. You don’t say!

The bar and burger joint in Kloof street is now called The Wolf House and the menu is slightly less offensive, with the Floozie burger being replaced by the Wolf.

According to the Western Cape Liquor Authority, it is investigating the public outcry in response to the restaurant acquiring its license under the name Floozies Flip and Dip.

“Public complaints concerning the granting of a liquor license under the name of Floozies Flip and Dip was raised with the Western Cape Liquor Authority,” it said to TimesLIVE.

“During the application for this liquor licence, as part of the public participation process, a hearing was held where it was highlighted by objectors that the name ‘Floozies Flip and Dip’ was not acceptable.” 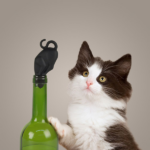 Put a PAW in it! Wine Bottle Stoppers For Vino Loving Cat People