International annual cooking championship held in the Serbian countryside sees one local team win for the second year in a row.

Now in its 15th year, the cheeky “World Testicle Cooking Championship” draws a motley mix of teams – from groups of friends to professional chefs – for a few days of fun in the Serbian countryside.

There they set up cooking camps in a forest, stirring bubbling stews over wood fires as they vied for the coveted “Ball Cup”.

While the testicles – grey in colour and with a kidney-like texture – may spoil some appetites, festivalgoers wax poetic about their taste and alleged aphrodisiac qualities.

“There were some really interesting combinations of flavour … the winner was super, really fantastic,” said Philomena O’Brien, an Australian woman who sat on the three-judge panel that blind-tasted dishes from nearly 20 teams.

“Choosing the best balls is quite a responsibility,” she added with a smile. 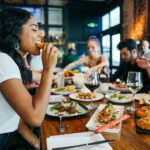 5 Tips For Dining Out When You’re On A Diet