Anything found to reduce the risk of death by 15% seems like something doctors ought to be imploring us to do.

And yet, when a study out of Harvard led to headlines promising exactly this benefit from three cups a day of coffee, the researchers did not suggest anyone pick up the habit.

Here’s the New York Times on the alleged coffee advantage:

The problem is not with your math. This kind of percentage figure is used more often to impress consumers with the importance of a study than to enlighten us about our health. In this case, there’s a critical piece of information missing.

A 15% reduced risk of death sounds very good. I assume my overall risk of death is 100%. For even a 5% chance at immortality, most people would drink porcupine urine. In other parts of the Times story, “premature death” is substituted for just “death,” but there’s no definition of premature. At what age are we able to experience mature death? 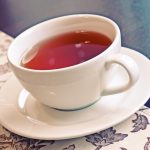 Get your caffeine kick from a cup of Black Tea