WE are all guilty of it, muttering those three little words while out enjoying a chilled glass of chenin blanc or a bold red burgundy with friends and colleagues.

“Let’s have another” rolls off the tongue all too easily and while it may seem innocent enough at the time, according to The Royal Society for Public Health, enjoying one tipple too many is contributing to the UK’s obesity epidemic due to the “invisible calories” contained in alcohol.

Chairman Professor Fiona Sim, writing in the British Medical Journal, has warned that adults who drink may be getting as much as 10 per cent of their daily calories from booze and has called for restaurants and drinks companies to include nutritional information on bottles and menus to educate consumers.

“Most women do not realise, for example, that two large glasses of wine (370 calories) is almost a fifth of their daily recommended energy intake, as well as containing more than the recommended daily limit of alcohol units,” says Prof Sim. That’s the same amount of calories as two bags of Malteasers. 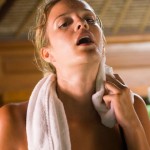