De Wetshof’s Bateleur Chardonnay 2020, the flagship wine in the range from Chardonnay pioneering De Wetshof Estate in Robertson, is one of only five South African wines to receive Platinum status at this year’s Decanter World Wine Awards. The estate’s Bateleur achieved a 97pt rating at this influential wine competition, while De Wetshof’s The Site Chardonnay 2019 garnered 94pts.

Over 18 200 wines from 54 countries were judged at this year’s Decanter Wine Awards.

Earlier this year the Bateleur 2020 was adjudged one of the top 10 wines at the Chardonnay du Monde, the world’s leading competition for wines made from the noble white grape of Burgundy.

According to De Wetshof CEO Johann de Wet, the Decanter World Wine Awards remains one of the most important wine competitions due to the acclaimed judges involved and the influence of the Decanter magazine brand in attracting wine entries from around the world. “At these awards you truly see your wines rated alongside the best in the world,” says Johann. “And with Chardonnay being one of the most contested varieties, a Platinum award scoring of 97pts on the global stage is a remarkable achievement for De Wetshof’s flagship Bateleur.”

De Wetshof Bateleur has had a good run at the Decanter Awards over the past three years, with the 2017 vintage achieving 95pts at the 2020 competition followed by a 96pt score claimed by the 2018 vintage last year.

This icon wine is made from a vineyard established in 1987 from plant material De Wetshof pioneer Danie de Wet sourced in 1981 from the famous Clos des Mouches vineyard in Burgundy.

“The plant material was then propagated and planted 35 years ago on broken mountain rock soils rich in Limestone and cooled by southerly maritime breezes,” says Peter de Wet, De Wetshof’s winemaker and brother of Johann.

“The quality of the fruit warrants aging the Bateleur for 12 months in new French oak barrels as the structure of the wine is complemented by the wood, not dominated by it.”

“The wine is fresh and accessible, with complexity in structure and a persistent mouthfeel to ensure the kind of classic presence on the palate great Chardonnay is known for,” he says. “The 2020 vintage obviously impressed the judges, but a Chardonnay of the stature of the Bateleur will age for 15 to 20 years.”

Johann says this year’s Decanter ratings for both the Bateleur and The Site vindicate De Wetshof’s belief in the excellence of South African Chardonnay.

“We are honoured to receive these accolades from one of the world’s leading wine competitions and hope this shows the world that South Africa is capable of producing white wines, and especially Chardonnay, that can compete with the best in the world.” 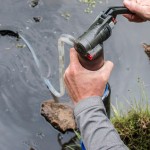 Water Purifier Pump Lets You Drink Just About Anything