Lots of tweeters made quick work Tuesday night bashing Donald Trump for the price of the booze at his election night party after seeing this tweet from the Washington Post’s Dana Milbank.

But take a step back. Cash bars are a common sight at electoral victory parties. What’s a bit out of line are the prices at Trump’s soiree, which is at the New York Hilton. And apparently there is an open bar in the VIP section at Trump’s bash, according to the New York Post. But this probably isn’t another example of Trump profiting at his supporters’ expense—shocking, I know. In the catering industry, it’s the venue that most likely sets the price for drinks if the host isn’t footing that particular tab. Trump’s mistake was picking an expensive midtown Manhattan hotel for his hoped-for victory party. 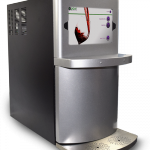 This high volume Wine Dispenser is the machine alcoholics dream of