Scientists have developed an electronic sensor that may prompt sommeliers to question their job security: it can identify different types of cava wine, the champagne-like sparkling wine from Spain.

Cava varies in type according to the amount of sugar added for the second fermentation, which produces the bubbles in the bottle as well as increasing sweetness.

The electronic tongue, as the sensor developed at Universitat Autonoma de Barcelona is called, combines chemical measurement systems and advanced mathematical procedures, including an “artificial neural network,” that mimics the human tongue and brain to parse levels of sweetness. 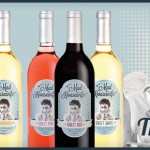