Repopulating your gut flora is about to get a lot more fun. One does not typically throw around the word “probiotic” at a party (except maybe in Santa Fe), but beneficial bacteria enthusiasts are about to get a brand-new product for after hours, thanks to Honeymoon Brewery and their cutting-edge kombucha beer.

Kombucha is a fermented drink made by introducing a “symbiotic colony of bacteria and yeast” (affectionately known as a “SCOBY”) into brewed tea to create a vinegary, fizzy probiotic drink that many consider to have a vast array of health benefits, and which has gone fairly mainstream in recent years.

Honeymoon Brewery, which currently produces only this alcoholic kombucha, comprises three Santa Fe locals who all went to Santa Fe Prep at more or less the same time. But the trio barely knew one another at school and only later reconnected, mostly by chance. Ayla Bystrom-Williams was introduced to Rena Glasscock by a mutual friend, and Bystrom-Williams began working for Glasscock at One Earth Solutions, an all-female landscaping company she managed. 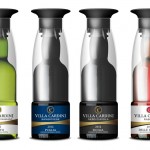