While working on a new series of his show Uncharted, Celebrity chef Gordon Ramsey and his crew wound up in Tasmania in search of Tasmania’s finest fermented grain.

With over 50 distilleries in Tasmania, Gordon and his crew had their work cut outbut one distillery, in particular, caught their eye.

“I am a whiskey collector and am in two different whiskey clubs, and my club all watches the show and they said, ‘You should have more whiskey in the show’,” he said. “And, of course, in Laos in Season 1, we had this sort of really not aged Mekong River rice whiskey. But we were looking at Tasmania as a place to go, it was a place that we felt would be really interesting. And I found out that there are more than 50 distilleries in Tasmania alone. Which is a third of the number in all of Australia, I believe. And there was this one guy who was winning all these awards, and we tracked him down and it turns out that he had just done this whiskey called ‘Wholly Shit’. And we just thought, well, we want to see the look on Gordon’s face when he hears that that’s what’s in the whiskey.”

Belgrove distillery makes Wholly Shit whiskey and the process of making it involves the dried dung of sheep that ate distillery grain, and it was burned instead of peat. The mash was effectively smoked in sheep shit.

According to Kroll, the finished product is exceptional.

“The truth is, it is magnificent whiskey and this guy is winning all these awards. It’s a beautiful rye and the lovely hickory notes that the smoke from the sheep shit brings to it really makes it a well-balanced rye.”

The show hit the screens on National Geographic in June and the effect was almost instantaneous. Belgrove’s top whiskey, the Belgrove Distillery White Rye, shot into the top 100 most-searched-for products on wine-searcher.com.

Prior to June, the whiskey had a search ranking of 147,792 among all the products on the website’s database. By the end of July, it was sitting at 91. Pretty remarkable for a whiskey from down-under.

However, it’s not all good news. As usual, increased interest has led to price hikes, too. At the end of June, the White Rye stood at an average price of $111 – by the end of July, it was $152. 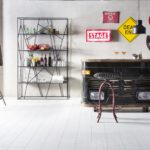 7 Steps To Setting Up Your Own Home Bar