More than a million people were expected to pack the streets of New York City Monday for the city’s annual St. Patrick’s Day Parade with one exception: Guinness.

“Guinness has a strong history of supporting diversity and being an advocate for equality for all,” the company said in a statement. “We were hopeful that the policy of exclusion would be reversed for this year’s parade. As this has not come to pass, Guinness has withdrawn its participation. We will continue to work with community leaders to ensure that future parades have an inclusionary policy.”

This came days after Heineken said it too was pulling its support, as well as Sam Adams in Boston. Boston Mayor Marty Walsh boycotted his city’s annual parade on Sunday, and New York Mayor Bill De Blasio announced he was skipping the parade on Monday. 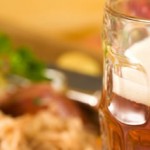