GUINNESS is donating hundreds of thousands of kegs to be used to fertilise Christmas trees after much of their stock went unused during lockdown.

Like most businesses, Guinness was forced to scale back their massive worldwide production of the black stuff once the globe was plunged into a pub-less nightmare earlier in the year due to the coronavirus pandemic.

Most beers have a use-by date, and once pubs and restaurants around the country closed, much of that will have quickly gone to waste.

But no one should ever waste a Guinness, right?

It seems the folks in Dublin agree.

Guinness’s flagship brewery at St. James’s Gate, which usually produces around 720 million litres a year (that’s 39 pints a second by the way), decided not to throw their stock away, but put it to another use instead.

They’ve donated their booze to be used as fertiliser for Christmas and willow trees, while some of it is being used to create bio-gas. 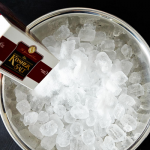 How to chill a bottle of wine faster