The company, based in the country’s western cape wine region, announced yesterday (29 November) that Hans Astrom has been appointed to the role, replacing Lowell Jooste in the New Year. Jooste will maintain his place on Klein Constantia’s board, albeit as a non-executive member.

Astom will join Klein Constantia from Hess Family Estates, where he is general manager. He has also spent time with Peter Lehmann Wines, where he was VP.

The Jooste family sold Klein Constantia to Zdenek Bakala and Charles Harman in May, with Lowell Jooste staying on as MD on an interim basis, “to ensure a smooth succession following the change in ownership”. 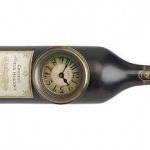 Average time spend to buy a bottle of wine