Some guy named Andrew walked into a Starbucks one morning knowing that he’d get a complimentary drink, because as a Gold member of the chain’s loyalty program, he gets one free beverage for every 12 that he buys.

But Andrew, crafty little devil that he is, decided to up the stakes. Why order a boring old 4-dollar Frappucino when he could order any drink that he could possibly dream up? He set out to break the previous known record for the world’s most expensive Starbucks beverage, and it appears he succeeded.

Armed with a 128-ounce glass, Andrew strolled into Starbucks, ready to claim his prize. He got the baristas on his side and they worked as a team to think up the priciest possible concoction. He said it was “delicious” but maybe it was the victory that tasted so good rather than the actual beverage, which included 60 shots of espresso. Yes. Sixty. 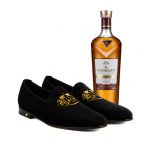