It follows HFWE’s appointment of John Grant, TWE’s former senior marketing VP for the Americas, as COO for its Californian winery, The Hess Collection, in August.

Murphy will report to Grant in his new role. Grant said: “We’re fortunate to have Michael join us during a period of great opportunity for Hess Family Wine Estates.

“He brings aboard a level of accomplishment, experience and insights that will prove valuable as we continue to introduce the next generation of Hess to the marketplace.” 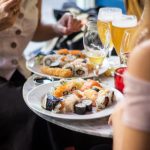