Is there a drink-by date on whiskey? In the simplest terms, whisky lasts almost forever. Distilled spirits don’t spoil and it won’t make you sick like, say, old milk. Distilled liquor won’t turn to vinegar-like beer and wine.

Initially, that can be a good thing. Do this: Open a bottle of whiskey and take a sip right away. You might not particularly enjoy the content. Coming back to that same bottle in a month’s time and you might find a whiskey that comes across much more integrated and cohesive on the palate.

A whiskey can go bad, but it’s extremely unlikely that it will actually go bad. If you will store it properly, it will be fine for many many years. Even after opening the bottle it still can be stored for a long time and will remain safe to drink.

How to store whiskey

Whiskey should be stored in a similar way you store other liquors – the bottle sealed tightly and kept in a dark place.

As long as the bottle is unopened, you only need to remember to keep whiskey in a dark place. Once the bottle has been opened, seal it tightly when not in use. When the bottle is opened and unsealed, the alcohol is exposed to oxygen, which causes a change of taste and, therefore, loss of quality. The more oxygen in the bottle, the faster the loss of quality. Therefore, if you have a half-full bottle of whiskey and you’re pretty sure you won’t use its contents in the nearest future, pouring the alcohol into a smaller bottle is a good idea. 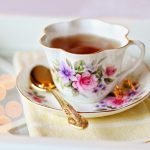 The History of Afternoon Tea