The Outer Coastal Plain might be the perfect place to make fine wine in America. The region, which has nearly the same sandy soil composition as Bordeaux, experiences a warm growing season; spring frosts are rare; and the breezes from the Atlantic Ocean and a local bay are ideal for winemaking. The O.C.P. has only one real challenge: it’s in southern New Jersey, a state associated with many things — Springsteen, Snooki, industrial pollution, the mob — but not great wine. Much of what is bottled there, in fact, isn’t even grape-based.

Louis Caracciolo, a vintner in Atco, N.J., just down the road from the Camden County Airport, is trying to change this reputation. Caracciolo, who refers to himself as Johnny Grapeseed, has spent a considerable amount of time promoting the notion that New Jersey may yet become an internationally recognized wine capital. It’s a long process but not without precedent. Caracciolo started making wine there in 1976, the same year as the famous blind tasting in which a bottle of Napa Valley cabernet sauvignon scored higher than several from the finest wineries in France, like Château Mouton-Rothschild and Château Haut-Brion. The Judgment of Paris, as it became known, transformed the reputation of the California wine business and helped build it into a $20-billion-a-year industry.

New Jersey’s wine industry currently generates about $35 million a year, but Caracciolo has large ambitions. A trained food scientist, he has learned that while merlot grapes have a rough time with his region’s cold winters, cabernet franc does remarkably well. He has visited wineries in Bordeaux and Burgundy and even consulted with winemakers at Château Margaux on his method of cleaning old barrels. A few years ago, he also reached out to George Taber, the respected wine journalist and author of “The Judgment of Paris.” Taber, who lived in New Jersey for 25 years, knew the state had a tradition of “mass production of rotgut,” but he was impressed by the wines at Caracciolo’s Amalthea Cellars. Last year, Taber helped organize the so-called Judgment of Princeton, in which a panel of respected wine critics, including two from France, compared New Jersey wines with some of the best French ones in a blind tasting. Shockingly, the results showed a near tie. Several Garden State vineyards — Heritage, Tomasello, Silver Decoy and Caracciolo’s Amalthea — scored nearly as well as Mouton-Rothschild and Haut-Brion. In several cases, the Jersey wines were hundreds of dollars cheaper per bottle, too. 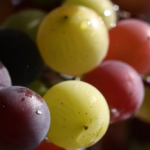 What happens when you put a grape in a microwave?