There is no worm in tequila. It’s in mescal, a spirit beverage distilled from a different plant. And it’s not actually a worm, but a butterfly caterpillar (Hipopta Agavis) called a gurano.

Both spirits are made by distilling the agave plant, and while mezcal can be made from a blend of one of 250 types of the cactus-like succulents to be classified as tequila, a bottle must be at least 51 percent blue agave (agave tequilana). The higher the percentage of blue agave, the finer the bottle. So tequila is a type of mezcal, but mezcal is not tequila, and only mezcal has worms.

According to Anthony Dias Blue‘s Complete Book of Spirits, that “worm” is actually a larva from one of two types of moths, known as maguey worms, that live on the agave plant. These larvae are called gusano and bottles of mezcal that contain the lil guys are referred to as con gusano.

But why the gusano? Theories abound. One traces the origin back to a distiller named Jacobo Lozano Páez, who in 1940 found that the larvae changed the taste of the agave and so began adding it to his spirits. Others believe that it brings good fortune and strength to the lucky person who finds it in a glass. In his book, Dias Blue writes that the insect serves as evidence of a mezcal’s potency; to pickle the gusano, the spirit must have a high percentage of alcohol. 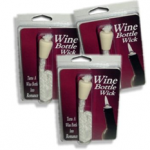