Drinking in a pub is one of the favourite pastimes of British citizens, but did you know it’s actually illegal to get drunk while doing so?

Though it may sound surprising, enjoying a few drinks at your local pub could land you in trouble if you take it too far.

Under the Criminal Justice Act of 1968, being drunk in a licensed premises – in other words, a pub – is illegal in its own right.

Section 12 of the Licensing Act, 1872 also stipulates that “every person found drunk… on any licensed premises shall be liable to a penalty”, which currently stands at £200.

Serving an intoxicated person is also illegal under the 2003 version of the Licensing Act, which states that alcoholic beverages should not be sold to, or on behalf of someone already drunk.

It might be one of the most unusual laws that have existed, but it’s still relevant in the UK today. 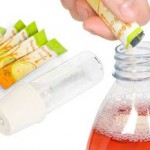 Powder that turns your juice into booze