We all know that Martinis and Champagne is the drinks of choice for 007 but in his next film, Skyfall, the secret agent will be drinking Heineken, as a result of a promotional deal.

This is however not the first time that James Bond will reach for a beer. He enjoyed a Heineken in Goldfinger.

Heineken USA has done a deal with the makers of Skyfall which is due out some time this year. When it opens, Daniel Craig, in character as Bond, will do a TV ad for the beer brand and in one scene in the movie itself, Bond will swill the stuff.

Product placement isn’t always a bad thing but I believe there’s some criteria producers should use before agreeing to let their characters get branded. Firstly, does it make the character seem lame? In this case, it does. Anyone one who trades in martinis and champagne for a Heineken beer is either bankrupt or on the brink of insanity! 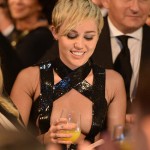 Miley Cyrus drops $500,000 for charity after sipping a few drinks