She’s apparently been off the booze since June.

But Kate Moss was spotted drinking wine and cocktails on holiday in Greece with her friends.

Kate was seen drinking wine with her friend at a bar on the Greek island of Hydra where she also smoked and enjoyed a cocktail.

The mother-of-one is said to have resumed drinking alcohol after going sober since June, influenced by her lover Nikolai von Bismarck, 29. 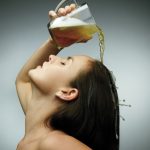 How beer can strengthen your natural hair