Mariah Carey faces a trademark battle over the name of her Black Irish drinks brand. This after a group of Irish drinks entrepreneurs are already bottling an alcoholic drink of the same name in Europe.

The announced the launch of her cream liqueur on Instagram, writing “Introducing Black Irish. Two years in the making. Truly a cause for celebration!!!”

In 2019, Carey applied to trademark the name and word mark “Black Irish” for use on alcoholic beverages, spirits, and liqueurs. The “All I want for Christmas is You” hit maker chose the name Black Irish to reflect her ancestry, The Currency reports. The singer’s grandparents on her mother’s side hail from Cork.

Their version of Black Irish is available nationwide in Ireland in some of the country’s biggest off-licences. The four Irish drinks industry veterans took over the trademark from a different company, which obtained it first in 2015, and they have launched the drink in Ireland. They have plans to take it to Europe too having created its distinctive taste and design reflecting its combinations of flavours.

A spokesperson for Carey’s new drink Black Irish in the US said last night in response to questions: “We do not currently have details on the distribution of Black Irish internationally but will certainly be in touch with any updates specific to the EU… We can certainly look into the other details but may not have them by your deadline.” At the time of publication, she had been unable to respond further.

Black Irish cream liqueur is not the self-confessed diva’s first controversial liquor deal. Back in 2010, the she launched Angel Champagne. The first 24 bottles sold for £25,000. That’s roughly £1,500 per bottle, making it the most expensive example of its type in the history of Champagne.

MC’s brand involvement went as far as reportedly ordering a $1600 bottle of Angel champagne – and had it delivered to the ladies toilet on a night out in New York.

The deal was doomed to fail from the beginning. In 2006, Wine Spectator reported that she doesn’t drink the stuff, because it “hurts her throat.” 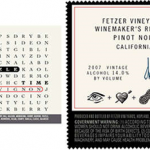 Behind Every Wine Label Lies a Real Personality