Named the most popular cocktail in the UK in November, the beverage is made by combining vanilla vodka with fresh passion fruit, passion fruit liqueur and lime juice, and is commonly served with a shot of champagne or prosecco. 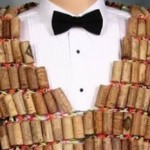