While there have been plenty of one-off, limited releases from the Patron Spirits Company over the years, it has been a quarter century since the tequila giant has rolled out a new year-round offering for its core product line. That will change this September.

Keen-eyed spirits fans might recognize the Extra Añejo name. That’s because the company has rolled out previous limited edition versions of it, though those were aged for seven years—and ran $299 per bottle (top image).

The everyday Extra Añejo will carry a suggested retail price of $89.99. 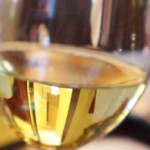 Why dry white wine doesn`t end up on your thighs