There is a new adult beverage in town and it is called a Phrostee. Now, the drink is under investigation and it comes with a big ‘buyer beware.’

As CBS 2′s Emily Smith reported, there are a lot of options when it comes to alcohol; Kool-aid looking drinks and things that mimic slushies. Now, there is a new adult beverage called a ‘Phrostee.’

With names like ‘Volcanic Paradise, and ‘Hereo’ the drinks might sound refreshing, but they are unregulated and reportedly under investigation by New York State’s Liquor Authority.

The drink has a private Instagram page with about 16,000 followers. That is where consumers can find instructions to text for the $10 drinks.

The page says that deliveries are made 24 hours a day and that you can only receive the beverage if the mystery company accepts you as a follower.

One Phrostee fan told CBS 2′s Dave Carlin that the drinks seem to be made from fruit punch, energy drinks, and a powerful liquor.

Senator Chuck Schumer said that he is concerned about kids and teens getting their hands on the drinks.

“They seem to be sold online without limitations for age. A 12-year-old could probably buy one and get it and enjoy it because it’s filled with fruit punch and fruit juice,” he said. 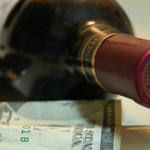