The menu pays homage to many cats, from pop culture sensations like Lil’ Bub (RIP), Delilah Mercury (Freddie Mercury’s beloved cat), Meredith Grey (Taylor Swift’s cat) and Mr. Bigglesworth (Austin Powers star) to notable cats in history including Astrocat (Felicette, the first cat in space), Unsinkable Sam (who served in the British Royal Navy) and the former Mayor of Talkeetna (Stubbs the cat, who served uncontested as mayor of Talkeetna Alaska for 20 years), among others.

The top image Grand Army’s amaro colada for fall; tropical and bitter all at the same time. The drink is dedicated to the co-founder Julian Brizzi’s family cat Oprah, who has past away.

Grand Army is celebrating the new menu by commissioning several local artists to create custom cat artwork for the bar. A Garfield-adorned toilet seat by @garfieldfrommemory has been installed in the W.C., and for dining room artwork, Matt Timms of @allthebadcats has painted watercolour illustrations of the cats who own Grand Army staff. 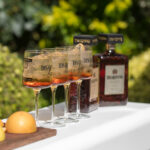