On Friday evening Prince Harry and a group of eight other guests had dinner at Reuben’s Franschhoek, on the eve of a charity Polo Cup match at Val de Vie, the main purpose of his visit to the Cape. It is the second visit by the Prince to the restaurant.

Restaurant Manager and sister of Reuben Riffel Carmen Wontyi was very kind in sharing information about the Royal dinner. The Prince’s party was welcomed via a back entrance and seated in the narrow passage section alongside the kitchen so that it was not visible to other guests in the restaurant. She shared that they were thanked for their arrangements in making the visit as discreet as possible. Only one couple in the restaurant recognized the Prince. Carmen said that they had an embargo until yesterday to announce the visit by the Prince.

The Prince enjoyed a starter of Beef Tartare and a main course of Pork Belly. The Prince’s entourage included members of his Sentebale charity as well as security staff. 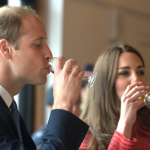 The Royals visit The Famous Grouse Experience at Glenturret distillery