Today, the Australian winery Penfolds announced the world’s most expensive wine sold directly from a winery, eloquently dubbed “2004 Block 42.” The $168,000 wine is a produced from a single vineyard, from what the winery claims are the oldest continuously producing Cabernet Sauvignon vines in the world. It will be sold in 12 glass ampoules (above), which look more like something you’d use to kill a vampire than to serve wine. Each holds the equivalent of a standard wine bottle.

Intriguing trappings aside, could the wine possibly taste good enough to justify the price? Perhaps. Research shows that people’s enjoyment of wine is influenced by how much it costs. According to Caltech neuro-economist Antonio Rangel, who has studied this, “When people drank the same wine, but they believed it was a more expensive wine, areas of the brain that are associated with encoding pleasure were more active.” 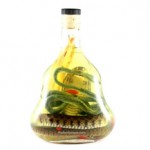