At the onset of the new season of “Scandal,” ABC’s prime-time soap-drama, Olivia Pope, the lead character, has fled Washington, D.C., and world intrigue for exile on a tropical island with Jake Ballard, her sometime lover. The only evidence of the rest of the world is a boat that shows up with an important delivery.

“We got the ’94 du Bellay,” she exclaims to Jake of this fictional Châteauneuf-du-Pape. “Only 100 bottles ever made, and now we have five. This will change your life.” He doggedly sticks to beer.

The island idyll doesn’t last for long. Back to work in Washington, Olivia resumes her more typical pattern of wine drinking, fretting in her empty apartment at night over an enormous goblet of red, a little popcorn on the side.

Over at CBS, Alicia Florrick, the high-powered lawyer at the center of “The Good Wife,” wants nothing more than a giant glass of red wine when she gets home from a day of legal maneuvering. She reminisces about her pre-legal days as a suburban wife and mother, when “drinking a glass of wine at 5” was her ritual.

American popular culture has always been awash in alcoholic beverages, but seldom has the drink been wine, red wine in particular, and rarely has it been treated so specifically as a beverage primarily for women, served in oversize goblets and consumed like the after-work cocktails of previous eras. Alicia and Olivia both profess to love wine, but they also drink to self-medicate, to inure themselves to the jagged emotional leaps in plot that buffet their characters and leave their viewers breathless. In theory, it’s a nod in the direction of Humphrey Bogart as Rick Blaine in “Casablanca,” downing shots to dull the pain of Ilsa Lund’s reappearance with another man. In practice, it’s different because it’s wine, not spirits, and those who love wine see it as far more than a numbing palliative for heartache and anxiety. 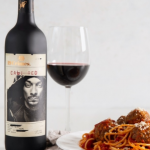