Details of the project have been kept under wraps for months, but The Daily Telegraph can reveal the vodka, to be called VDKA 6100, will be officially launched by De Niro at the Tribeca Film Festival in New York in April.

Mr Packer has given life to the project by investing in the Sydney company Artisan Spirit Merchants, the brainchild of entrepreneur Julian Moss, creator of brands such as Vodka O and Tequila Blu.

The gaming mogul is quickly expanding his Hollywood connections following the birth of his RatPac film financing and independent production joint venture with movie director Brett Ratner. “Robert (De Niro) has become a friend and we’ll be launching a business together before long,” Mr Packer told The Daily Telegraph in a recent interview.

De Niro, who has built a successful hospitality business through his Nobu restaurant and hotel brand, is ­described as the “co-creator” of VDKA 6100 and will be the face of the brand.

“Robert is very impressed with the quality of the vodka and has been the co-creator of the new bottle and brand,” one source said.

It is believed the star of legendary films such as Taxi Driver, Raging Bull and Casino will receive about $1 million a year under a five-year agreement with Artisan Spirit Merchants, which has declined to comment. 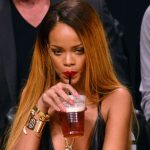 Rihanna Spotted Kicking Back with a Beer in Boston