Samsung’s next generation of connected appliances has hit shelves in the United States as part of the tech giant’s push into ‘smart homes.’

Among the new devices are a new kind of sleep tracker, and an upgraded hub that lets you control “smart home” appliances through your phone.

The SmartThings Hub—which Samsung announced on Wednesday at the IFA 2015 conference in Berlin—connects with nearly 200 compatible devices such as phones, speakers and lights. It also comes integrated with GitHub, an open-source developer community.

The Hub records video and monitors motion, lasting up to 10 hours on a battery in case of power outages, according to Samsung. It only records video when sensors detect motion. The Hub can also handle some tasks without a internet connection. 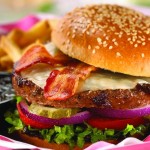 How does junk food affect the human body?