If you love Indian food so much that you want to smell like it, then we’ve got good news for you!

A digital artist based between Pakistan and London is in talks with the appropriate people to potentially launch a biryani perfume.

According to UK reports, a 22-year-old entrepreneur worked on an edit of the flavoured rice inspired fragrance and sent it into the ether.

The photoshopped image quickly went viral on social media, being shared among Bollywood stars and politicians.

The artist, who aptly goes by the name My Curry is Popping on Twitter, says the perfume wouldn’t quite be available at your local Boots but works more like an exhibition piece.

‘Thinking about it now, biryani is like fried onion, and then like spices and other fragrances! It’d be weird.’

Being the biryani stan the artist is, he’s even added a hint of aloo (potato) to the imagined fragrance.

We asked him to explain exactly how the idea came to be. He said: ‘My friend came to visit me and he got me Shan biryani masala cause I was craving that and we were just going back and forth that if I cook in my apartment the whole building will smell like biryani.

‘So it basically just stemmed from a box of Shan biryani.

‘It would be called Both Sides because in a Frank Ocean song he says “I see both sides like Chanel” – and I was basically shaping everything up to be like the iconic Chanel No5 bottle. 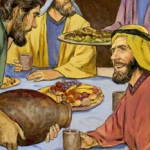 Alcohol, the good gift from God