Klein Amoskuil Farm situated in the Swartland has been home to Spice Route Winery since 1997. Upon arrival all those years ago, Charles Back stumbled across the country’s oldest Sauvignon Blanc bush vines, which were surprisingly able to withstand the extremely dry conditions of the area.

The Amos Block is made from these vines, which are harvested from mid to late January each year. It is fermented without any additives in old French barrels, and lightly fortified, after which a flor yeast culture is added and the wine is left to age in the Swartland heat.

The primary bottling is a solera of three vintages, from 2014, 2015 and 2016. The result is a youthful, pale and dry fortified sherry-style wine, with aromatic hints of apples, almonds and walnuts.

Amos Block is fresh and fully flavoured with a lingering finish. It is best suited to accompany a diverse selection of tapas-style food and must be consumed within a few days after opening. This is due to it being bottled straight from the barrel and totally unfiltered.

The Amos Block is both a tribute to the birthplace of Spice Route Wines and a marker of Spice Route’s winemaking prowess. Head winemaker Charl du Plessis says of this new creation: “This has been a project a few years in the making, and is a truly exciting endeavour for our team. Using South Africa’s oldest Sauvignon Blanc vines was an honour, with the resulting product being something beautifully unique and memorable.” 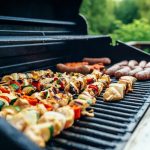 Is It Healthy To Eat Grilled Foods?