We can’t help but snicker when we remember all the judgey-wudgey veg-heads who’ve scolded us for our meaty ways over the years. This study goes out to you, friends.

According to a survey conducted by U.K.’s Voucher Codes Pro, over one-third of those who claim to be vegetarian, in fact, eat meat after getting a little tipsy. The Voucher Codes Pro website states that “Kebab meat and beef burgers” were the most popular cheat treat. Nos. 3, 4 and 5? Bacon, fried chicken, and pork sausage respectively.

The company blog went on to say, “The team there surveyed 1,789 people in the UK, all of whom were vegetarians, as part of the study. Initially, respondents were asked ‘When drunk, do you ever eat meat?’ To this, over a third of respondents (37%) admitted that they did so. The remaining 63% of respondents were adamant that they never ate meat when drunk.”

Another tasty tidbit: 69 percent of those drunk meat-eaters said they don’t admit to others when they’ve slipped up. 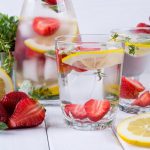 5 Beverages That Are More Hydrating Than Water