Stellenbosch University has temporarily banned alcohol in university residences and private student accommodation in a bid to combat alcohol abuse among students and gender-based violence.

The temporary ban came into effect on January 1, 2020.

In a brief to students, the university said the decision was reached because of rising concern for students, with two incidents in the past year being highlighted.

The first surrounded the death of a student last year after he was taken off life support when he “aspirated” – or choked – in his sleep.

The specific circumstances surrounding his death are still not clear, the university stressed.

“But there had been speculation that he had consumed a lot of alcohol, and also rumours that there was some kind of drinking game or ritual or residence tradition involved,” the brief read, which was also alluded to in media reports at the time.

“The second example is something that has been in the news a lot over the past months and continues to be a strong focus at SU [Stellenbosch University] and actually nationwide and globally – gender-based violence. In other words, sexual assault, harassment and rape perpetrated by men against women,” the university said.

“We have to now step up and take ownership of how we are going to combat the difficulties that make our living and learning communities unsafe and unwelcoming spaces for many of our students and newcomers.”

It added the university had entered into talks with students mobilising against gender-based violence and a memorandum was drawn up by the Anti-GBV Movement SU.

“We are jointly setting up working groups to tackle various aspects of the problem of gender-based violence,” the university said.

During the review period “no alcohol will be allowed to be consumed in SU student accommodation or on its premises” until the residence rules have been reviewed.

“Campus community leaders like Professor Wim de Villiers, the rector and vice-chancellor of SU, said the right thing for all residences to do is to proactively evaluate their respective cultures and traditions and constitutions against the values of the university.”

No student will be allowed to store or consume alcohol in student accommodation. If this is done, it will be a “residence disciplinary matter”.

“These rules stay in place until new residence rules that have the positive impact of changing the binge-drinking culture to a culture where drinking limits consumers’ blood alcohol content to 0.08%, are agreed upon,” the university said.

It added: “We are open to a period of engaging conversations with our students about the ways in which we will combat these difficulties to make our living and learning communities safe and welcoming spaces for all.” 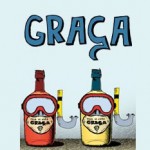 Graça is a blend of …